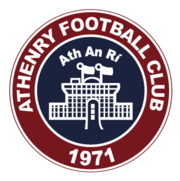 FITNESS IS KEY TO B'S SUCCESS

Match Report
Athenry’s Senior B’s first league game of the new season 2015/2016 an exact same fixture as last year’s season.
The Senior B’s have been working hard in pre-season with a few games under the belt working on their play and fitness. A new look team with some old players having left and some new players having signed for the B’s this season.  El captain Barclay Healy still at the helm of the team for another season. Young 17yr old Niall Cannon stepping in goal for their injured goalkeeper Jason Ollernshaw who had a good game over all, it’s a big ask for this young man who is more than capable of filling the shoes of their regular keeper.

A great start by the lads playing flowing football from the back four, sharp passes, outplaying their opponents in the first half. Plenty of opportunities went a miss with some excellent play between the midfield and the three lads up front Mark Lawless and Declan Egan on the wings with Joey in the middle of the park. The lads looked and seemed much fitter and faster than the other team with some continuous great play from Mark Lawless on the right wing crossing the ball into Joey Burke who just didn’t have his finishing boots on within the first 20mins of the game. It’s true to say that Mark & Joey worked their socks off to get the goal they truly deserved.

The team looked really positive in their play and it was not long before they got their chance with Colin Bane playing the ball out wide to Mark Lawless from the centre of midfield then Mark running onto the ball making a well weighted cross into Joey Burke who fired the ball at Kinvara’s keeper only to follow up for the loose ball with one of Kinvara’s centre backs diving on top of the ball handling the ball with their keeper. The ref called for a penalty with their keeper being very vocal towards the ref earning himself a booking. Aido Fahy having placed the ball on the penalty spot fired the home team in front with a solid penalty. Not long left before the ref blow up for half time.

After a positive team talk by their coach Roger Leggett the 2nd half kicked off. Not long into this half Athenry were awarded several free kicks but were unable to add to their lead. Roger Leggett mentioned to his number two Roger Cronin that the lad’s seemed tired and he could see the Kinvara were getting the upper hand on the game as they had missed a couple of times on the home team’s goal. It seemed that some players were in denial as to their fitness and had obviously reached their peak, but were trying to prove themselves to Roger when he asked them if they were ok. This causes the team to show weakness as players are not able to admit to themselves that they need to come off putting unnecessary pressure on their team mates.

Not long before Roger Leggett made some substitution’s having taken off David Murphy, Barclay Healy, for Neil Murphy and Kevin Murphy, dropping Joey Burke into the back four and pushing Aido out to right back. The team seemed to be a complete different team from the first half; some tired legs were showing with sloppy passing to players. Kinvara’s persistent attacking play paid off as they ran on from a loose header that should have been cleared by Athenry but with them looking very tired they couldn't clear the ball as Kinvara’s player ran on and slotted past Athenry's young keeper.

With about 15/20mins left Roger Leggett took off Mark Lawless for Larry Coffey. From watching the game Mark Lawless was well worth “man of the match” with his tiresome work rate before being substituted. Unfortunately for Athenry it seemed as in other games I’ve watched that when the other team score their heads drop. Athenry were pushing for the winner but this just didn’t come.
It should have been a win for Athenry for the performance of the team but as in previous games as last season they let it slip.
​
REFEREE MAKES A POINT WITH OFFSIDE DECISION

​
Match Report:
Athenry began their defence of the Premier Division title with a 2-2 draw at home to Corrib Celtic. It was an Athenry team that saw 6 changes from the side that featured in the Connaught Cup Final back in May. Maybe because of these changes in personnel or maybe just early season rustiness it took the home side awhile to settle. Neither team created much in the opening period of the game as players tried to get used to the very wet and slippery under foot conditions.
The first half saw a couple of half chances falling to either side but in truth the keepers were rarely tested. That was until the last attack of the half when Corrib Celtic took the lead, it came from an excellent cross from the right that was met with a bullet of a header to give Darragh Murphy no chance in the Athenry goal.
The home side changed the formation slightly at half time giving Jamie O'Driscoll and Gary Delaney a little more freedom to push on. Athenry began to get a foothold on the game and equalised when Brian Murphy played a through ball for Gary O'Donnell to score from a lovely strike from the edge of the box. Within 5 minutes the home side were ahead when Gary O'Donnell again scored, this time he rose unchallenged inside the six yard box to power home the lead goal from a corner.
Athenry had introduced Ryan Shaughnessy and Alan O'Donovan at this stage as they tried to drive home their superiority. There was a sting in the tail however as Corrib Celtic equalised with one of their few second half attacks.
They broke quickly and played a through ball behind the Athenry defence which the centre forward ran onto and scored much to the dismay of the Athenry players who claimed he was well offside. The referee however was not for changing and the goal was allowed to stand.
The final quarter of the game saw Athenry dominate possession without creating any clear cut chances with the exception of a well worked move that ended with a Gary Forde overhead effort going just over the bar. As darkness fell the referee blew full time. It will be a game Athenry will look back on with mixed emotions. They battled back into the game in the second half showing the qualities that brought them the league title last year but will be ultimately disappointed with the way they conceded the equaliser.
With a point on the board Athenry have the second game of the league v St Bernard’s to look forward to next Wednesday evening in Abbey.