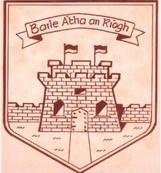 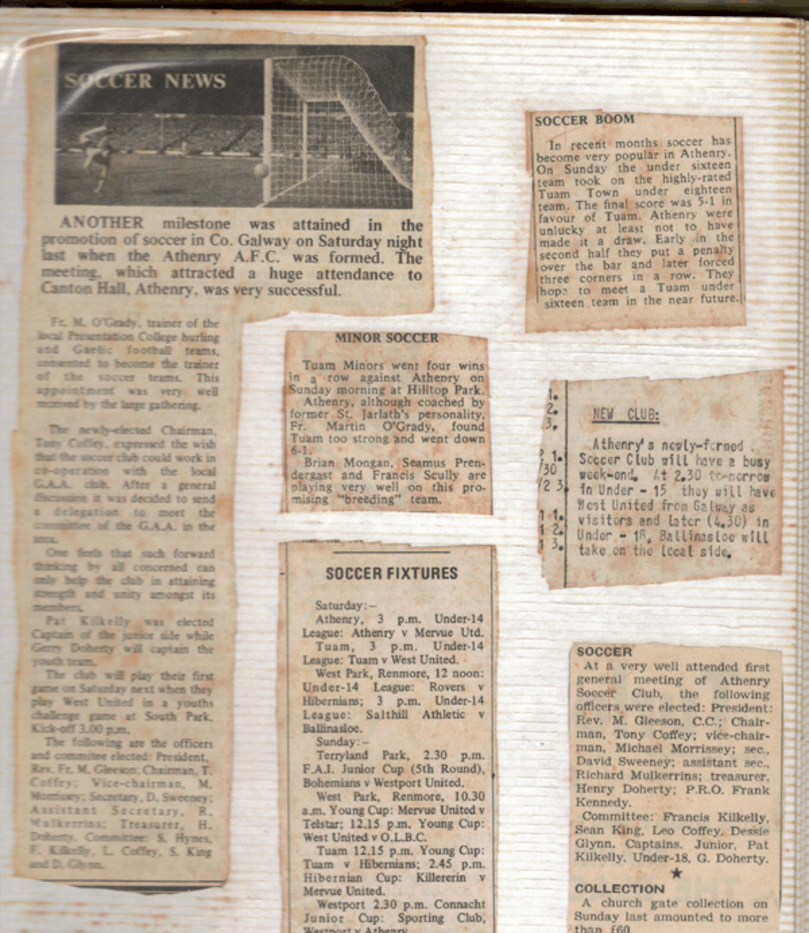 Athenry FC is an Irish association football club in County

Galway which was founded in 1971.The clubs most senior

Division.The club is one of the biggest contributors to the

league in terms of teams entered into the Galway & District

Leagues various divisions and at all juvenile levels.

The following is taken from the diary of Dessie Glynn one of the founding members of the club from 1971.

​
The entry in my diary for Wednesday 17th March,1971 reads as follows; Went to twelve mass. Played soccer in school. Talk of a soccer club being formed. Formed a Club- Henry Doherty and company.  Went for walk in Moneen. The field we played in that day was the convent field. It was where the present secondary school is now located.

That of course means that this is the moment, St.Patricks Day, 1971. It was decided that we wanted to form a Soccer Club in Athenry. Shortly afterwards, we arranged a meeting for the Canton Hall, where a committee and officers were elected. That is the official date of the  setting up of the Athenry Soccer Club. The next reference in my diary is for a Soccer meeting in the Canton Hall on April Sunday April 3rd,1971. I remember, I cycled to Cussane to tell Peter Gillhooley about the meeting about starting a Soccer Club in Athenry. Peter, Tommy Fahy and Willie Killeen attended the first meeting in the Canton Hall.

In conversation with Tony Coffey, Caherroyn Avenue, in the Square, Athenry on 23rd January, 2008, in the company of Seamus Mulkerrins, Ard Aoibhinn, Tony (elected first Chairman of Athenry Soccer Club in 1971), said that while he was walking about the school grounds on St. Patricks Day 1971, he was approached by Henry Doherty and a group of lads, and Henry told him that they wanted to form a Soccer Club. Looking back on these events, Tony felt that there were a couple of reasons as to why he was approached by the lads. Firstly, he was more senior than them and therefore had a certain respect and, secondly, that he actually had a soccer ball which he had brought back from England the previous year. The ball being used by the lads playing that day may in fact have been his.

​BACKGROUND TO THE ESTABLISHMENT OF THE CLUB

In the town in the late 1960s and early 70s we played a lot of soccer in the ‘Abbey field’ in Abbey Row beside the present day (2020) Rooney’s Monumental Sculptors. The big ‘derby’ fixture used to be the Town versus Caheroyan which was played with all the passion of a World Cup final. We had seen the first World Cup televised in colour in 1970 and many of us wanted to play like Brazil or Italy. Of course after England won the previous World Cup in 1966 that also gave us many role models. Local soccer was also played ; in Caheroyan (then called ‘Sweeney’s Field’ but presently (2020) called the Presentation College playing field), in Carnaun, Mountain North/Castle Ellen, Prospect/Ballygurrane, in Park, in the New Line Road and in Tiaquin/Colemanstown. In the town, we also played in the ‘convent field’ of the now (2020) old Presentation College beside the railway station. A basketball court is presently situated where the pitch was.

Many soccer clubs established throughout the country -
The era was the mid-sixties and the start of the 1970s. The GAA ‘ban’ on playing ‘foreign’ games was lifted in 1971. A lot of people returned from the U.K in the 1970s, the country was improving due to joining the European Economic Community, now called the European Union (EU).

Ireland began to undergo big changes and the most significant was television. As youngsters, we had watched television since 1962 and seen the Galway football team win three All-Irelands in-a-row from 1964 to 1966. We had watched the 1966 World Cup Final in England, won by England. Most interestingly, later we watched the 1970 World Cup in Mexico City between Brazil and Italy. Brazil won 4-1. This Final was the first World Cup Final to be televised in colour and visually made an impression on us watching. Also making an impression was captain of the Brazilian team Carlos Alberto who struck a wonder goal. Jairzinho, Pele and Rivelino were some of the other stars for Brazil. As a result of the television coverage of that 1970 World Cup, many local soccer clubs were established in Ireland. This had an effect on us and we tried to imitate the great players. Also, in 1970 Chelsea won the F.A. Cup against Leeds United after a replay in Old Trafford. Athenry A.F.C. adopted the blue colour of the Chelsea jersey as the first colour of the club jersey. This was also the year that George Best famously scored five goals for Manchester United versus Northampton Town in the F.A. Cup.